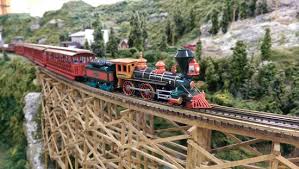 The railroad came to Hendersonville in June of 1879. Thus started a century of passenger and freight trains coming through Hendersonville and during the heyday of the train, up to six passenger trains a day made their way through the town.

Southern Railway built the Hendersonville Railroad Depot in the early 1900’s as a station for the increased railway traffic. The original building was slightly less than 100 feet long, had two waiting rooms, an Agent’s office, a freight office, and indoor plumbing. By 1916 additions were made to the railroad depot to include an open pavilion that stretched all the way to Depot Street which is now Seventh Avenue.

In 1992 the Apple Valley Model Railroad Club moved into the Historic Hendersonville Railroad Depot and restored it to its original glory. The members painted the depot to match its original color and the structure was shored up and other enhancements were made. In 2000, the building was registered as a historical landmark.

The Apple Valley Model Railroad Club has a HO model train layout in the depot that is really amazing in its detail and craftsmanship. I was told by one of the members that it is not to scale of all of the surrounding railroad towns but more of a representation of towns like Old Fort, Marion, and Morganton.