Background on the Historic Johnson Farm 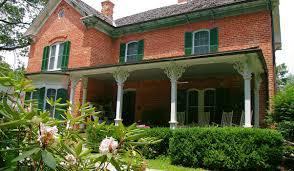 The Historic Johnson Farm in Hendersonville started out as a farm in the 1870’s, became a boarding house in the early 1900’s, and is now a National Historic site that was donated to the Henderson County Board of Education for use as a heritage education facility.

The property where the Johnson farm is located was bought by Oliver H. Moss in late 1874 from D.L. Boyd. Moss purchased 310 acres from Boyd and contracted local builder Riley Barnett to build the handmade brick farmhouse. Clay from the banks of the French Broad River was used to make the brick for the farmhouse on the site where the house was built.  The farmhouse was completed by Barnett in 1880.

Moss sold the property to Robert H. Liverett in 1888. Liverett’s daughter Sallie had married Leander Brownlow Johnson in 1890 and they had two sons. Vernon was born in 1891 and Leander Jr. was born in 1895. Vernon and Leander Jr.’s father did in 1896 and Sallie moved herself and her two young sons to her father’s farm shortly after her husband’s death. They farmed the land until Robert Liverett’s death in 1913.

Sallie decided to use the farmhouse as a boarding house with herself, Vernon, and Leander Jr. operating it. The boarders helped to farm the land and the boarding house was so successful a second house was built in 1923 that had 11 bedrooms.

The Johnson’s boarding house had a familial setting to it.  Boarders spent evenings rocking in the chairs on the front porch enjoying the cooler mountain climate, Saturday night square dances were held, and Sunday afternoons was for ice cream. The boarding house stayed in business until 1958 when Vernon and Leander Jr. closed it after the death of Sallie Johnson.

The Johnson brothers were firm believers in education. Vernon and Leander Jr. graduated from North Carolina State University with degrees in engineering. Leander, who got his degree in Chemical Engineering, was a Chemist in the United States Army during WW II.

In 1970, the Johnson brothers started donating smaller parcels of their land to the Henderson County Board of Education. The land across the road from the Johnson farm where original owner Oliver Moss had planted tobacco in the 1880’s was donated and Rugby Middle School was built there. The Johnson brothers also helped to design and build the football stadium that West Henderson High School still uses today. With Vernon’s death in 1978 and Leander Jr.’s death in 1987, the Johnson farmhouse and land itself was donated to Henderson County to be used as a heritage education facility.

Several websites were used when I was researching this article. Most historical places like this have their own, www.hendersoncountypublicschoolsnc.org/johnson-farm/history. There was another site, cojoweb/ref-johnson-farm-history.html, that was excellent as well and went more into the history of the Johnson farm.

I was also able to find the United States Department of the Interior National Park Service National Register of Historic Places Inventory-Nomination form labeled the “Moss-Johnson Farm”. It is a 12 page document that details the entire structural inventory of the Johnson farm as well as the historical background as to why the Johnson Farm was being registered as a historical site.

I also discovered that Johnson Farm has a little bit of a dark history. Robert H. Liverett, Sallie Johnson’s father, shot and killed his son John on the farm over a work dispute and then killed himself. That story was reported in the Western North Carolina Times on April 25, 1913. When Sallie moved herself and her two sons onto the farm seems to be uncertain but she did open the Johnson farm to boarders shortly after this to capitalize on western North Carolina’s budding tourism industry.