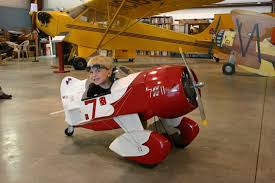 The museum has several planes on display many dating back to the 1920’s and President George H.W. Bush visited the museum on 5 September 1992 to see the Oshkosh Champion Stearman N2S-4. Planes such as the Stearman were used by President Bush and other pilots to learn to fly during WW II.

In 1955 the Cessna airplanes came to Hendersonville and Meyer became a dealer for the Cessna’s. In 1968, Meyer sold the airport to local resident and businessman and former student Robert Winkler.

I grew up about a mile from the Hendersonville Airport so I had a pretty good view of the occasional air shows and the planes coming and going. I also remember a crop duster in the late 1970’s and early 1980’s flying so low over my house you could clearly see the pilot. The crop duster was a bright yellow biplane and the crop duster flying over the house was a sign that summer had officially begun.

In June of 2015 I had the opportunity to go to the Western North Carolina Air Museum’s Air Fair at the Hendersonville Airport and it was a lot of fun. The museum had an open house where you could see all of the planes in the hangar and the people associated with the museum were available to talk and share their knowledge of the airplanes. It was my first visit to the museum and I plan on going back June 4th and 5th of this year for their “It’s Just Plane Fun! Air Fair, Fly-In, and Museum open house.”

What to Look out for at Motorama
Video: Mountain Farm Museum
Hendersonville Named Among 12 Charming Small Towns In the South