Enjoying the Beauty of Chimney Rock 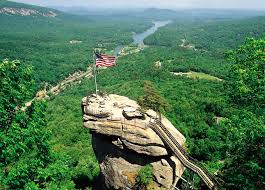 Chimney Rock is a place of tremendous natural beauty and ecological diversity located in the Hickory Nut Gorge only 18 miles from Hendersonville. Chimney Rock is the story of one man’s vision, his desire to share that vision with the world, and his family’s dedication to perpetuate that dream.

Chimney Rock got its start when Jerome “Rome” Freeman bought 400 acres that included Chimney Rock around 1870 from a land speculation company for $25. Freeman had the idea to build a trail to the base of Chimney Rock and to also build a stairway to the top. He opened up Chimney Rock to the public in 1885.

Dr. Lucius B. Morse was a Doctor in Chicago around 1900 when he was diagnosed with tuberculosis. He made his way to western North Carolina and a tuberculosis sanitorium in Hendersonville. He began taking horseback rides into the surrounding countryside and he discovered Chimney Rock. He was enthralled with the beauty of Chimney Rock and the Hickory Nut Gorge in which it was located. He saw the potential to share the natural beauty with the world.

Dr. Morse contacted his two older brothers, Hiram and Asahel Morse and invited them to visit the area and check out Chimney Rock. In 1902 the three brothers pooled their money together and purchased 64 acres that included Chimney Rock from Rome Freeman for $5,000. Over the next several years, the brothers bought small tracts of land that eventually increased the property to about 1000 acres.

The Morse brothers began to gradually make improvements to Chimney Rock to make it more easily accessible to the public. In 1916 they fashioned a rough three mile road to the base of Chimney Rock and built a bridge across the Rocky Broad River. The bridge was dedicated on 4 July 1916. About two weeks later, the Great Flood of 1916 devastated western North Carolina and the bridge was washed away. Not to be deterred, the brothers rebuilt the bridge and it stood until 1916 when it was replaced by a modern steel structure.

Other improvements were made to enhance the Chimney Rock experience. In 1923 a restaurant and an inn called the Cliff Dwellers was opened. In 1925 the brothers and a group of investors formed Chimney Rock Mountains Inc. that laid the foundation for the formation for the town of Lake Lure. A dam and a hydroelectric plant were built in 1926 and the lake was filled in. The Lake Lure Inn and Spa was opened in 1927.

The stock market crash in 1929 and the ensuing Great Depression brought an end to Chimney Rock Mountains Inc. as the banks began to foreclose on the properties they owned throughout the Hickory Nut Gorge. The lake was given to the town of Lake Lure but the Morse brothers privately bought back Chimney Rock Park. The Park made it through the Great Depression with the brothers still at the helm.

Dr. Morse died in 1946 but the other two brothers carried on his work at Chimney Rock Park. In 1949 Hiram installed an elevator to make the visit to the top of Chimney Rock much easier and other improvements were made throughout the years. Improvements were made to the grounds and hiking trails, the Sky Lounge was rebuilt in 1982 after a fire consumed it in late 1981 and a five acre Meadows was created around the same time to allow for larger groups visiting the Park.

In the 1970s and ‘80’s, the Morse family saw a need to preserve the plants and wildlife of Chimney Rock Park and experts were brought in to start educational programs and to protect and preserve the ecological diversity of the park. In 1992 a Nature Center was opened at the Meadows and according to the chimneyrockpark.com website, it “offers guests an introduction to the history, botany, geology, and other special aspects that make the Park a truly natural attraction.”

Chimney Rock Park is one of the few places that I have written about that charges an admission fee. The admission fee is $15 and it is a good idea to plan on spending the better part of the day in the park.