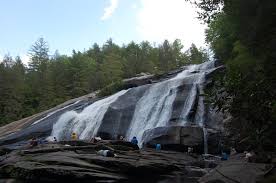 The original deed for the land that was to become part of the DuPont State Recreational Forest goes back to john Thomas Jr. in 1799. He conveyed the land to three sons in 1813. One of those sons, Micajah, was born in 1808. He built a homestead on the land and farmed the land and he also built the Buck Forest Inn for travelers on an early road between Hendersonville and Brevard.

As is the case with most areas in the mountains around Hendersonville, the property that was to become the DuPont State Recreational Forest is rich with family legends concerning the Civil War. According to Thomas family legend, Micajah was blinded at the hands of Union Troops looking for information towards the end of the Civil War. He was struck by the rifle butts of the Union troops and not getting the information they needed, the troops burned the Buck Forest Inn and the Thomas homestead. Micajah Thomas died in 1883 and is buried in the Thomas Family Cemetery on the DuPont State Forest property.

Another cemetery on the DuPont State Forest property, the Hooker-Moore cemetery, contains the grave of a veteran of both the Confederate Union Armies. James Lewis Sentell enlisted in the Confederate Army, the 62nd North Carolina Regiment, Co. E, on April 13, 1863 in Transylvania County and was listed as a deserter less than four weeks later on May 10, 1863. He later joined the Union Army, the 2nd North Carolina Mounted Infantry, Co. F, on October 1, 1863. He was later killed in a skirmish on July 17, 1864 while recruiting for the Union Army in 1864.

In the early 1800’s the Moore family owned the land around what was to become Hooker Falls. In 1882 the Moore family sold the land to three Hooker brothers and one of the brothers started a grist mill beside the Falls that was later to bear their name.

Two things that were a constant throughout the development of the DuPont State Recreational Forest were the harvesting of the timber of the forest by lumber mills in the area and wildfires.

In the early part of the 20th century, there were several lumber mills in the area that harvested the timber. Gloucester Lumber Mill in Rosman, Carr Lumber Company in Pisgah Forest, and later the Champion Paper Mill in Canton were all active in the area.

In the early 1940’s and periodically throughout the 20th century, several wildfires have burned the property with the biggest being in 1943 that burned a large portion of the area west of the Little River.

The Coxe family in Asheville leased over 5000 acres of the area in the 1940’s. They wanted to use the area primarily for hunting and fishing and they built the Buck Forest Lodge near High Falls to be used as a hunting cabin. A caretaker house and a barn were also built on this property. The house and barn was near where Joanna Road and the Pitch Pine Trail now intersect.

Joe Golden was hired to be the caretaker for the Coxe family.  He farmed crops in the area and ran a small sawmill near the Little River. Triple Falls on the Little River became the scene of Joe Golden’s unsolved murder on Mother’s Day in 1947. Newspaper reports said that his body had been found a day after the murder with a single gunshot wound to the chest from his own pistol. An investigation was conducted by local law enforcement but no one was ever charged.

In the 1950’s, the DuPont Corporation bought almost 10,000 acres and in 1955 a plant manufacturing silicon chips was opened and in 1958, DuPont started making x-ray film. In the late 1950’s, DuPont started a forest management program under the leadership of Charles Paxton and they started allowing companies like Champion Paper Mill in Canton to harvest some of the timber.

Today the DuPont State Recreational Forest is almost 10,500 acres with about 2,600 acres of that falling under the North Carolina Natural Heritage Program for special ecological significance. These ecological communities are protected under this program.

The DuPont State Recreational Forest is a 10,473 acre forest maintained by the North Carolina Forest Service. The Forest is well known for its four major waterfalls on the Little River- Triple Falls, High Falls, Bridal Veil Falls, and Grassy Creek Falls- five lakes of which Lake Julia at 99 acres is the largest , and 82 miles of roads and trails. The trails are multi-use and are popular among horseback riders, hikers, and bicyclists. The lakes and forests are also popular for its fishing and its hunting with the proper permits.

Snow Tubing at Black Bear is a Hendersonville Must
History of Connemara
Video: Mountain Farm Museum