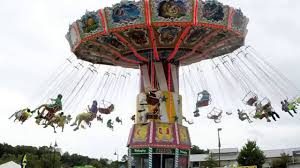 The Mountain State Fair is an event at the Western North Carolina Agricultural Center in September of every year. The fair begins the weekend after Labor Day and lasts for 10 days and the fair is also the third largest fair in North Carolina. The fair celebrates the heritage of the Blue Ridge Mountains and features agriculture, livestock displays, mountain crafts, art, as well as live entertainment and amusement rides.

The county fair has a long history in Henderson County that dates back to the early 1900’s. The Western North Carolina Fair began in the Laurel Park section in Henderson County in 1903. Livestock was on display as were all sorts of produce and arts and crafts. Mule races were a popular attraction at these first fairs.

In the early 1930’s, the American Legion took over the operation of the fair and the site of the fair was moved from Laurel Park to where East Henderson High School stands today. The mule races were eventually replaced by drag races and stock car races on a small dirt oval track.

The fair remained at this site until 1958 when it was moved to a site off of US 176 behind the National Guard Armory in East Flat Rock. The American Legion used members of the local fire departments to park cars at the fair and my father was a member of the Blue Ridge Volunteer Fire Department. The stock car races were replaced with a demolition derby that was held on the last night of the fair. My father always took me the last night so I could see the demolition derby. This would have been the mid-1970’s and a demolition derby was exciting stuff for a 10-year-old boy.