History of The Long-Standing Curb Market 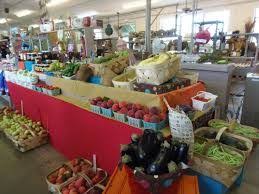 In the late 19th and early 20th century, Hendersonville farmers would load up their wagons with their produce and small livestock and start knocking on doors of houses and hotels in the area trying to sell their goods and whatever the farmer had leftover at the end of the day, would be used to barter with mercantile operations for sugar and flour and whatever other household items that were needed.

Shortly after World War I, Hendersonville farmer Frank Fitzsimmons Sr., who later wrote the three volume series on the history of Hendersonville From the Banks of the Oklawaha, began advocating a central location for farmers to gather and sell their produce. He brought the idea home with him after serving in Europe during World War I and seeing these “curb markets” in the European towns and cities.

The Curb Market has several stipulations to ensure that all of the products and goods sold there are local. The vendors have to live in Henderson County and all of the goods and produce have to be made or grown here. The goods range from crafts, produce, jellies, jams, and honey, plants, flowers, and toys.

I first started going to the Curb Market when I was a young boy in the 1970’s when one of my Aunt’s used to take me and my cousin. The last couple of times I have been within the last few years, I bought some homemade jam and some homemade dog treats for my dog Molly.

The Curb Market is located at the corner of Church Street and Second Avenue and its hours of operation are Tuesday, Thursday, and Saturday from 8 to 2. The Curb Market has a few events throughout the year. “Old Timey Day” in  June and September and an “Old Timey Christmas” in December.