History of Mineral and Lapidary Museum of Henderson County 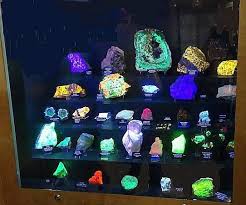 Henderson County has a rich geological history that dates back to the 1880s. The Mineral and Lapidary Museum of Henderson County celebrates this geological history that displays “a range of specimens of raw minerals in their natural state to polished gemstones and other finished material. “ The museum also has fossils on display as well as the Hendersonville meteorite. The museum opened its doors on November 6, 1997.

The Hendersonville meteorite has gained a certain amount of worldwide geological fame as pieces of the original meteorite are scattered all over the world. The original 11 pound, 6 ounce meteorite has been cut up into several pieces and is now at Arizona State University, Vanderbilt University, the American Museum in New York, the National Museum in London, and the Smithsonian Institution.

In 1903 Geologist Dr. W.H. Jarman of Nashville, TN procured the Hendersonville meteorite for his collection and shortly afterwards he donated it to Vanderbilt University as part of the Jarman Geology Collection. Professor L.C. Glenn of Vanderbilt gave the first known description of the meteorite and he described it as a chondrite meteorite whereas most meteorites are of nickel-iron composition.

Beginning in the 1880’s, Henderson County also gained a reputation for its zircon mines. The two biggest zircon mines in Hendersonville, the Jones Mine that was operated by Captain M.C. Toms and his son C.F. Toms and the Meredith Freeman mine operated by Geologist W.G. Hidden. The Hendersonville zircon mines drew the attention of inventor Thomas Edison because zircon crystals were used in the making of light bulbs at that time.

According to an article published in the Times-News on March 8, 2015 and written by Tom Orr, Thomas Edison came to Hendersonville in early June 1906 to inspect the zircon mines. Edison and several guests arrived in two big white steamer cars and drew a crowd in the hotel on Main Street they stayed in.

According to the website hendersonheritage.com, the Green River community nearest the mines was named Zirconia in 1890 and this area is still recognized as having one of the strongest veins of zircon in the world. The “vein of kaolinized zircon-bearing pegmatite 100 feet wide, extending over a length of 15 miles.” Nevada-outback-gems.com/mineral_information/zircon_mineral_info.htm.

The Mineral and Lapidary Museum of Henderson County is open from 1 to 5 p.m. Monday through Friday and 10 a.m. to 5 p.m. on Saturdays. Admission is free and the museum also hosts several events throughout the year.