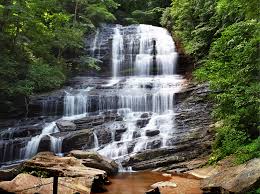 Pearson’s Falls is a 268 acre glen hidden in the Blue Ridge Mountains about three miles south of Saluda, NC and four miles north of Tryon, NC. The glen has over 200 documented species of plants. The centerpiece of the glen is a 90 foot cascading waterfall.

The area is named after Charles William Pearson who was a Captain with Company H of the 5th North Carolina Cavalry Regiment during the Civil War. He came to the Blue Ridge Mountains of North Carolina near an area known as Pace’s Gap for the purpose of surveying land for the Norfolk Southern Railroad. A railroad route was needed for a line that was going to run from Salisbury to Asheville and then from Asheville to Murphy.

Pearson ended up choosing a route that took the railroad up the Saluda grade and when this rail line was completed, it became the steepest mainline standard-gauge grade in the United States. The route ended up connecting the Western North Carolina mountains to the routes south into Spartanburg, Columbia, and Charleston, South Carolina.

Pearson discovered the glen that was to become known as Pearson’s Falls during the process of surveying for the Norfolk Southern Railroad, and he purchased the property for the enjoyment of himself and his family. He allowed friends and neighbors to enjoy the natural beauty of the glen as well.

In the early 1930’s, the Great Depression affected mountain communities like it did the rest of the nation, and Charles William Pearson’s son needed to sell the property known as Pearson’s Falls. He originally agreed to sell the property to a logging company. However, in 1931 the Tryon Garden Club intervened and bought it with the contributions of a generous benefactor to preserve the beauty of the natural botanical garden. The Club still maintains the property today.

I relied on several websites while doing the research for this article. Among those are pearsonsfalls.org and blueridgeheritage.com. Pearson’s Falls is closed in January of every year but reopens to the public in February. The Falls and surrounding area come to life every year in the spring and are great to see in the fall when the leaves are changing color. The summer months are a good time to take a picnic lunch and enjoy the light mist coming off the falls.

Dan Gibbs is a Henderson County native and received his Bachelor of Science degree from Appalachian State University in 1988 and his Masters of Arts degree in American History from Western Carolina University in 2002. He developed his love of local history listening to stories told by his great-grandfather, grandfather, and father and can trace his lineage in Western North Carolina to the 1780’s.