The Folklore of Lake Lure 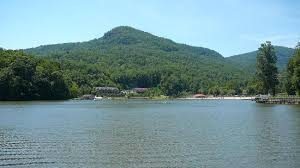 Lake Lure rests in the Hickory Nut Gorge in Rutherford County and is a town of great natural beauty with a scenic mountain lake as its centerpiece. It is also a town of myths, legends, and the paranormal.

Lake Lure was the vision of Dr. Lucius B. Morse who saw the potential for a mountain resort in the Hickory Nut Gorge complete with a lake, a spa, and inns. Morse, with the financial help of his two brothers and other investors, formed Chimney Rock Mountains Inc. and started buying up land in the Hickory Nut Gorge and the total acquisitions ended up totaling about 8,000 acres.

There was no lake in the Hickory Nut Gorge in the 1920’s so in order to make his mountain lake resort a reality, Dr. Morse and his investors had to create a lake. The construction of a dam on the Rocky Broad River at Tumbling Shoals began in 1925 and the dam was completed in September 1926.

The town of Buffalo was a farming and mining community of approximately of 150 people in what was then known as Whiteside Valley on the banks of the Rocky Broad River. When the lake was impounded, the town of Buffalo was submerged by water and became part of the underwater landscape of what became known as Lake Lure. Most of the buildings were moved before the town was flooded but the schoolhouse and several other buildings were left behind. It has been said that if you boat out to the center of Lake Lure and look straight down, you can still see the outlines of the submerged buildings.

The lake was completed in 1927 and covers 720 acres and has a shoreline of almost 27 miles. It also has a seven acre island. The lake was given the name Lake Lure by Dr. Morse’s wife Elizabeth. The Lake Lure Inn was built by Morse and opened for business in that same year and the town of Lake Lure was also incorporated.

The stock market collapse in 1929 led to the foreclosure of the all of the holdings of Chimney Rock Mountains Inc. but the Morse’s were able to hold onto to Chimney Rock Park.  Lake Lure did not become the resort that Dr. Morse envisioned but Lake Lure has still thrived as a popular vacation destination.

The town of Lake Lure was not able to acquire possession of the lake until 1965 but had been operating the recreational facilities at the lake since the Carolina Mountain Corporation in 1931.

The Chimney Rock/Lake Lure area has had reports of paranormal activities since 1806. In July  1806, a procession of angelic beings dressed in white robes were seen near Chimney Mountain by several witnesses. The figures began circling Chimney Rock and once they reached the summit of the rock, they began disappearing one by one. The whole procession lasted about an hour. According to the witnesses their disappearance left “a solemn and pleasing impression on the mind, accompanied with a dimunition of bodily strength.”

Five years later in 1811, five eye witnesses reported that a battle was seen raging between two armies of cavalry in the skies above Chimney Rock. Swords flashed and the sounds of battle were also heard and this battle was played out at dusk over the course of several evenings. This sighting received so much attention, that a public meeting was held in Rutherfordton with the witnesses.

The Lodge in Lake Lure was built in the late 1930’s by the North Carolina Highway Patrol as a retreat for the patrolmen and their families. In 1937 North Carolina Highway Patrolman George Penn was killed in the line of duty and the Lodge was built as a memorial to him. This information was obtained from an article that appeared in the Times-News website BlueRidgeNow.com on 11 Dec 2006. The Lodge was eventually sold in the late 1960’s and was opened to the public as The Lodge on Lake Lure in 1990. It is believed by many that it is George Penn that still visits the Lodge and in particular rooms two and four.

The 1927 Lake Lure Inn has a fascinating history of famous guests including writer F. Scott Fitzgerald and his wife, several cast members of the cast of the movie Dirty Dancing which a large portion of the movie was filmed in Lake Lure, a couple of Presidents and many others. The Inn is also the home of a reported ghost that has spoken to employees and guests on numerous occasions. An apparition of a young boy was caught on film by one of the employees at the Inn when the employee was photographing the dining room before a wedding. The apparition was not noticed until several days later when someone was looking at the pictures on social media.

Several websites and paranormal investigative agencies have visited the 1927 Lake Lure Inn and videos have been posted on websites and on Youtube. Yourghoststories.com posted a youtube video on 26 Aug 2007, hauntedplaces.org 28 Feb 2009 also posted a video on youtube, and southernspiritguide.blogspot.com also had a lot of information on the paranormal in Lake Lure.

The website hickorynutgorgehikes.wordpress.com on some great stories on the myths and legends in Lake Lure and has a pretty good take on the history of the Hickory Nut Gorge and surrounding areas.